Over the past few weeks, the campaign trail has focused heavily on Tasmania, with Prime Minister Scott Morrison and Labor leader Anthony Albanese using their frequent flyer miles to garner support and make election promises in Bass – the country’s most marginal seat.

Affectionately regarded as the ‘ejector’ seat, Bass has only re-elected one sitting member since 1993 and has changed party status eight times.

About three-quarters of the electorate live in Launceston, but the seat spans almost 8000 kilometres in the north-east of Tasmania.

Currently, Liberal’s Bridget Archer holds the seat with a 0.4 per cent margin, winning the seat from Labor’s Ross Hart in 2019.

Mr Hart, a lawyer of 30 years, has returned as the Labor candidate for 2022 but faces strong competition from Ms Archer.

She has gained supporters for being fiercely independent, crossing the floor and departing from the party position on a cashless welfare card, religious discrimination and a federal integrity commission. 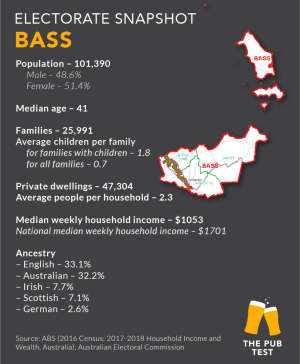 The battle for Bass will be one to watch, and if history tells us anything, voters can be unforgiving.

Each week until election day, we’ll be visiting pubs in key electoral battlegrounds to ask locals for their opinions on a major election issue.

On Tuesday, Mr Albanese backed a 5.1 per cent increase to the minimum wage, stating that people shouldn’t go backwards.

Mr Morrison criticised Mr Albanese for proposing a solution that would make matters worse by exacerbating inflation and driving up interest rates.

More broadly, he also said Mr Albanese was promising something a government could not deliver as wages were set by private employers.

“I’m not interested in false promises of wage increases. Cost of living is something we need to fight for, and if this is something that Labor can achieve, then great. It’s not a lot, but every little helps.

“If Anthony says he can do it, I trust him.”

“It would be great. I’m a worker. Food and rent are going up, but my wages haven’t.

“Wages aren’t keeping up with the economy, and it might not sound like a lot, but that dollar is better in my pocket.

“What annoys me is that politicians will say anything to get elected, so I don’t know who to believe.

“I know that Scott Morrison lives in a bubble and doesn’t know the real issues facing people.”

“With $700 a week to live off and pay for everything, any increase would be welcome.

“It is no surprise that people struggle with mental health when living week to week.

“I don’t trust either of them [Albanese and Morrison].”

“There has been a lot of conversation around how big business can afford a wage increase, but I think they [Labor] are ignoring small businesses.

“The opposition is being a bit naive. If you put up wages, you run the risk of people losing their jobs because many employers are in the small business sector.”

“It’s about time wages increased for everyone and governments can influence that.

“Neither Scott Morrison or Anthony Albanese understand how people live. Cost of living has soared in the last six months and is expected to keep rising.”

“I agree with Scott Morrison. It’s one thing to say you will increase wages, but how do you do it?

“It’s not easy. It sounds good, but it just doesn’t happen.

“Don’t get me wrong, Morrison has his failings too.”

But in a sign of the tight battle ahead for both parties in Bass, two voters who said Mr Morrison failed the pub test still had less-than-favourable things to say about Mr Albanese.

Next week, in our final pub test before the election, we’ll head to a marginal electorate in Perth.

Disclaimer: The quotes above represent the opinions of those interviewed and are not necessarily based on facts or endorsed by The New Daily