WA, the tyranny of distance and a mob of people who may well be unable to vote

by Charlie Lewis
A recent announcement that the Australian Electoral Commission was struggling to fill polling stations in WA is just another example of the challenges presented by the sheer size of our westernmost state.

So much of understanding Western Australia starts with its size. If you’ve never been there, nothing can quite communicate the sheer vastness of the place, its isolation, its sparseness. Take the seat of Durack, over a million and a half square kilometres spread across the top half of WA, taking in the Mid West and the Kimberley, home to just under 100,000 electors.

The Australian Electoral Commission announced this week that it was struggling to staff polling places in several communities across the electorate (as well as in O’Connor, which covers a comparatively slight 868,576 square kilometres across the state’s south). As of this morning, of the 15 postcodes around the country suffering staff shortages, eight are in WA. The ability of these communities — all remote, many largely Indigenous — to vote is under threat. 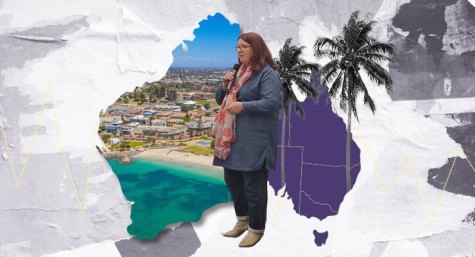 Tangiora Hinaki, CEO of Pilbara-based independent community broadcaster Ngaarda Media — you may remember their work on Terrance Flowers, the man wrongly identified as Cleo Smith’s abductor last year — gave Crikey an indication of how the distance spreads once a polling station closes.

“So in the past we’ve had a centre at Roebourne, which worked really well — most of our local mob could walk there, it was a good atmosphere,” she says. “Now Roebourne isn’t going to have a local polling place — our nearest one is in Wickham, about 12 kilometres away.

“So that means a lot of local Aboriginal people won’t be able to make it, because they don’t have a vehicle. Then there’s the pastoralists, like Yarrie Station out near Marble Bar — they’re going to have travel something like 100 kilometres to vote.”

The expanse has many concrete effects. Durack is very safe for the Liberals, and it’s where the majority of the state’s resources are extracted. How, for example, does any group deeply unsatisfied with the Coalition’s climate policy get any kind of cut-through?

“There are a lot of people who feel threatened, because they are employed in high polluting industries, and that’s really the story of regional Australia, from Gladstone to Geraldton,” Hamish Maclean, an advocate with local group Midwest Carbon Zero, tells me.

There was a Voices of Durack campaign for a local independent but it wasn’t able to secure a candidate — and besides, is anyone a local across half a state?

“It’s a huge seat, it’s pretty hard for a non-funded group to get out and get a true voice for the electorate,” said Maclean. “That is a challenge, to get that engagement, to have kitchen table talks from one side of the seat to the other, and then to find someone that meets what’s gonna be a pretty broad range of needs.”

The size and spread of WA always makes it hard to predict — and its two years as Australia’s hermit kingdom, with the largely popular measures to lock the border and keep out the COVID-ravaged east, haven’t exactly helped on that front.

“The thing is, the federal government has been quite a distant concept for these last two years. With the hard border, the prime minister and his high profile MPs haven’t been able to visit,” explains Martin Drum, senior lecturer in politics and international relations at Notre Dame University. “The only omnipresent figure is [WA Premier Mark] McGowan. We’re isolated all the time, but this has obviously been accelerated during the pandemic.”