by Cam Wilson
The PM's pick was a calculated gamble, and it blew up in his face — but not before hurting vulnerable people around the country.

The PM’s pick was a calculated gamble, and it blew up in his face — but not before hurting vulnerable people around the country.

If you’re being generous, you could say that at least part of Scott Morrison’s rumoured electoral strategy for the Liberal Party went to plan.

Last week, Nine’s Niki Savva reported that senior Liberals also believed what many had suspected: Morrison’s full-throated support of transphobic candidate Katherine Deves was more than just a stubborn belief in his own captain’s pick. They feared that he was leaning into a culture war over trans Australians that would trade losing inner-city seats for picking up electorates in the outer suburbs.

Well, Morrison got at least half of what he wanted. The Liberals gave up those inner-city seats. But they didn’t make up the ground with outer-suburban seats from Western Sydney or the Hunter.

The performance of the NSW Liberals is an indictment of Morrison’s handpicked candidates and strategy. The NSW Liberals were unable to pick up anything in the House of Representatives and instead lost across the board (although it does look like the party will still pick up three Senate seats). 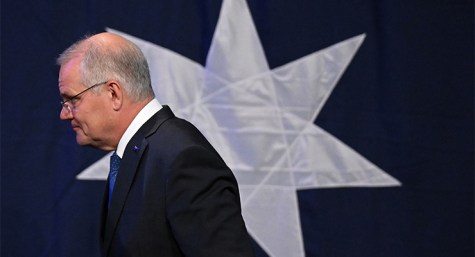 After tens of thousands of words were written about Deves, the result was the most obvious one. A candidate in a socially progressive seat, who had weeks of coverage about her abhorrent, disgusting views on a marginalised group, lost with a swing of 5% away from her party.

If you zoom out a little bit more, a young, professional working mother who — if you ignore her views on trans people (a big “if”, but indulge this) — was a fairly moderate candidate went backwards from Tony Abbott, a social conservative who was ill-suited to a modern Warringah.

Morrison’s promotion of Deves’ obsession with trans people appears to have backfired. The early results show that a confected moral panic around trans women in sport does not resonate with most voters, confirming prior polling that said as much. Australian conservatism’s dabbling in the anti-trans politics that has become increasingly popular with its US and UK counterparts has not paid off — at least for now.

It’s not all silver linings. Deves’ candidacy has undeniably elevated the issue. It found currency in some corners of the media, particularly in News Corp stables. Trans Australians have seen some of the country’s most powerful people and a third of voters in Warringah support a candidate who called them mutilated, sex offenders. This has a real impact. Calls to the national LGBTIQA+ helpline QLife spiked during Deves’ campaign.

Beyond being political losers, Scott Morrison’s and Katherine Deves’ legacies will be their cruelty. Their defeat will be of little comfort to the vulnerable Australians who they hurt.