by Cam Wilson
The fight over the Indigenous Voice to Parliament will seize the nation's attention. These two MPs are already signalling how they plan to hijack it.

Anthony Albanese wants an Indigenous Voice to Parliament. The prime minister used the opening of the 47th Parliament to reiterate his government’s commitment to implementing the Uluru Statement from the Heart: “We trust this Parliament will act responsibly.”

So far, this week shows how those apposed to a Voice to Parliament will try to foil those plans. During the pomp and ceremony of the first few days of Parliament, Pauline Hanson and Jacinta Nampijinpa Price have signposted their opposition to one of the government’s most high-profile commitments, a case that the Australian media are all too willing to give an inordinate amount of oxygen to. 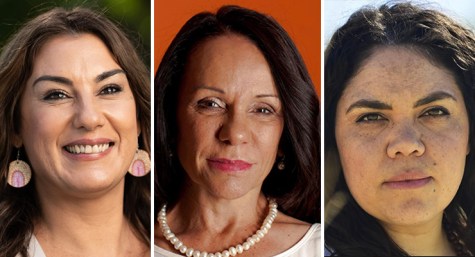 Yesterday Hanson walked out during the Senate’s acknowledgment of country for her latest stunt. Despite having sat through a similar ceremony dozens of times, the career politician loudly objected. She posted a video on her social media channels immediately afterwards arguing that the acknowledgment alongside a plan to raise the Aboriginal and Torres Strait Island flags in the chamber were stoking racial division in the country.

Australia isn’t racist, says the woman whose long political career started with the Liberal Party disendorsing her for making unsavoury comments about Indigenous welfare, but acknowledging the country’s original custodians apparently is.

The media made this the story of the day. Coverage moved to the reaction of other politicians, before finally circling back to the One Nation leader’s defence of her stunt. Dr Kurt Sengul is a far right politics and populism researcher who’s written about Hanson. He tweeted: “The media failed this test …”

Later, Warlpiri-Celtic woman and new Country Liberal NT Senator Jacinta Nampijinpa Price gave her maiden speech, during which she laid out how that opposing “pointless virtue signalling” instead of addressing “true causes of why Indigenous Australians are marginalised” is her political raison d’etre.

Price directly took aim at the Voice to Parliament and the prime minister, claiming that Albanese had said “that our Voice to Parliament bestowed upon us through the virtuous act of symbolic gesture by this government is what is going to empower us”.

She was one of three indigenous MPs who delivered their maiden speeches on Wednesday. Hers was by far the most covered; the other two, Marion Scrymgour and Jana Stewart, and their support for a Voice didn’t get the same exposure.

In just a single day of Parliament, Price and Hanson have neatly demonstrated the foundations of the case against an Indigenous Voice to Parliament and how the media is ready to be hijacked to promote that view.

Polling suggests that creating such a body is fairly popular (although not as popular as some of the Albanese government’s other major policies). Giving a disproportionate amount of air time to arguments like Hanson’s case that Indigenous recognition is itself promoting division and Price’s belief that a focus on symbolic gestures obstructs real work improving Indigenous welfare will only undermine that.

Price and Hanson are from different political parties. One’s been in federal politics for decades, the other is just getting started. But what they have in common is how they’ve used racial politics to make a name for themselves.

The fight over the Indigenous Voice to Parliament will draw national attention, stoked by a media built around amplifying conflict and controversy. The first week of Parliament shows Price and Hanson are all too ready to seize this opportunity.