Michael Pascoe: The Pope’s a Catholic and forecasting is a mug’s game

I’m starting to feel sorry for the Reserve Bank governor, such is the extent of the pile-on since he apologised on Monday for loose lips sinking mortgage ships during the heat of the COVID war.

For a start, I’m not as sure as most of the commentariat seems to be that Philip Lowe’s infamous “the cash rate is very likely to remain at its current level until at least 2024” comment was the main factor in firing up borrowing and housing prices.

Making money free will tend to do that with or without such commentary, never mind the turbo-charge provided by the Morrison government’s second-rate $2.1 billion HomeBuilder splurge.

In the context of the times, the RBA had done all that could be done with monetary policy to fight the possibility of recession/depression from a global pandemic, so Philip Lowe reached for the only other tool at his disposal – the Jawbone.

He has been swinging the Jawbone again since he started lifting rates, hoping the talk about interest rates continuing to rise might mean they won’t have to rise so much. A governor can only do what a governor can do.

But, yes, Dr Lowe went too far with the Jawbone in 2021. He made the big mistake of trusting a forecast of what the world might look like in two or three years’ time. Nobody can be sure of that.

At the time, the governor thought he was fighting the good fight, but he forgot the first and second rules of forecasting: 1. It’s best done in retrospect; and 2. It’s a mug’s game.

For any given financial forecast, you have at best only one chance in three of getting it right. You’re either on the money, above it, or below it – and either of the latter two outcomes can cause trouble.

The Economics Society lines up the allegedly best and brightest of their trade twice a year to look into their crystal balls – and you know the clear majority of them will get the key forecasts wrong and the average prediction will be wrong more often than not as well.

With a week to go to the December RBA board meeting, only three of the 22 still have a chance of being nearly right. One of those three is dependent on the RBA not moving the rate next week, another will require a rise of 15 points to 3 per cent (unlikely) and the third needs a rise of 45 points to hit 3.25 per cent (more unlikely).

Is anyone calling for the economists to be sacked for being wrong? No – nobody in their right mind takes their forecasting that seriously.
The Reserve Bank’s crystal ball also lacks divine guidance – it can only make its best guess on what it knows at the time.

If none of Economics Society’s 22 can get the cash rate right six months out, why think the RBA can forecast three years out? You shouldn’t.

The point of any economist’s forecast isn’t that it will be right, but that it will provide food for thought and provoke the consideration of options, not hard rules for investing.

It’s why the RBA should stick to its usual practice of providing a range of how wrong or right it might actually be.

That’s what it does in its quarterly statement on monetary policy, as the accompanying graph of the bank’s inflation guess shows. 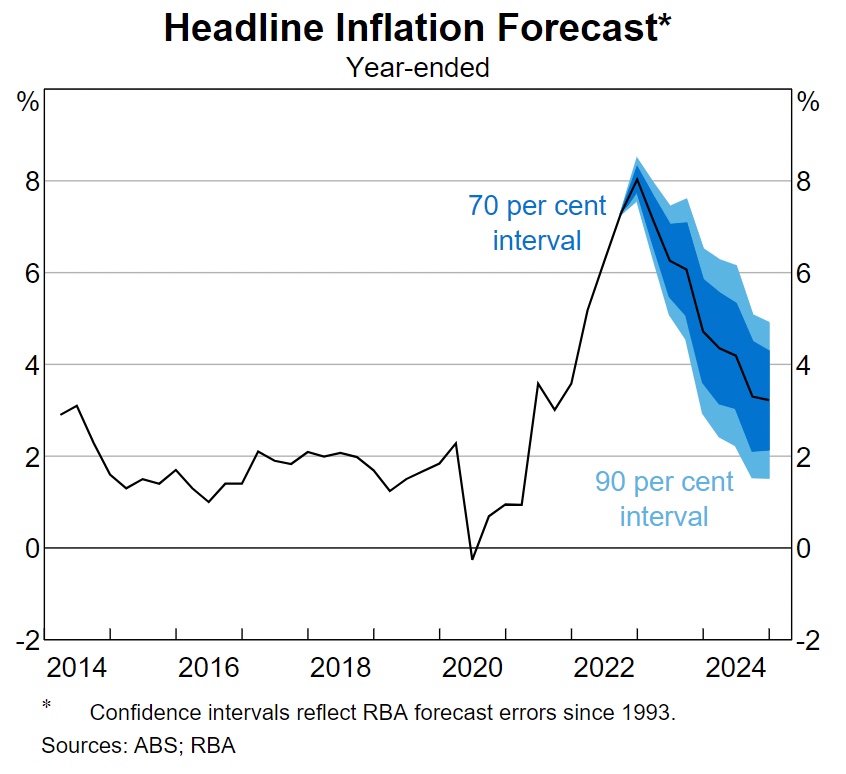 Based on its historical performance, there’s a 90 per cent likelihood of inflation being somewhere between one-point-something and 5 per cent in two years’ time. Anyone want to bet their house on that?

You can bet the RBA, suitably chastened, won’t be applying the Jawbone as loosely as it did in 2021.

But more importantly than all this is the need to again underline that the RBA does not run the economy – government fiscal policy has a much bigger role than the RBA’s monetary policy.

Moving on from Dr Lowe’s dud speech to his best one in years last week, the government’s role becomes even more important when inflation is coming primarily from the supply side, rather than from demand.

For example, on Monday Dr Lowe fingered rent and energy costs as the key looming inflation problems. Lifting interest rates will have no positive effect on either and could have negative effect.

Government action, on the other hand, can have impact both in the short and longer terms.

Of course, the government of the day has to have both the will and the ticker to take the necessary action.

We keep being promised or at least nudged that action on energy is coming.

On housing, Labor so far has brought a spoon to a gunfight, and promised worse – the nonsense “one million more homes in the five years from 2024” slogan.

If that is all the new housing stock built over that period, our housing catastrophe will be much, much worse.

Don’t be distracted by historical RBA mistakes – play the game in front of us.