It would be misleading to say Marise Payne and Penny Wong squared off at the National Press Club this afternoon. The foreign policy debate between the foreign minister and her Labor counterpart was by far the most civil, constructive exchange we’ve seen during the campaign.

A coincidence, perhaps, that this is the first major debate featuring two (or any) female politicians so far.

But it’s also a reflection that beneath the sometimes hairy-chested rhetoric on China — where the government has absurdly accused Labor of playing “appeasement politics,” labelled Deputy Opposition Leader Richard Marles a “Manchurian Candidate,” and called Anthony Albanese Beijing’s preferred pick for prime minister) — the two parties are pretty much in lockstep when it comes to foreign policy.

Some of those attacks were made most vocally by Defence Minister Peter Dutton at a similar press club debate against his Labor counterpart Brendan O’Connor last week. 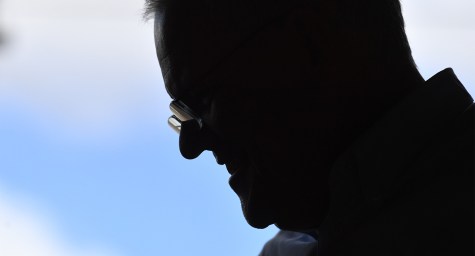 “We are all patriots,” Wong said early in the piece today. “Mr Morrison and the Liberal Party do not have a monopoly on patriotism.”

Key areas of difference emerged, unsurprisingly, on the Solomon Islands, where Wong tried to push Payne on inconsistency within the government on the country, and the meaning of Prime Minister Scott Morrison’s comments that a Chinese base would be a “red line” for Australia.

“It means that there are certain key security issues such as the presence of a Chinese military base in our region, which would be of deep and fundamental concern to Australia,” Payne said.

Wong also opened with a promise to appoint an ambassador for First Nations peoples.

“We will ensure First Nations peoples have a stronger voice in our engagement with the world, deepening their long-held ties across countries of the Indo-Pacific,” she said.

But not long after Payne and Wong had wound up, Dutton popped up with a national security update of his own: a Chinese surveillance ship had been spotted off West Australian waters.

Impeccable timing, although the defence minister fudged questions about whether the election had anything to do with things.

“I think it is an act of aggression,” Dutton said.

Every chance then that today’s civility could go out the window in the final week, as a desperate Coalition escalates its attack on Labor over defence and national security.

There was also a whiff of desperation around Morrison’s press conference this morning (which was later hijacked by a man dressed as Kim Jong-un) where he promised voters, just a week out for the election, that he would change if returned to office.

“I know Australians know that I can be a bit of a bulldozer when it comes to issues and I suspect you guys know that too,” the prime minister said.

“As we go into this next period on the other side of this election, I know there are things that are going to have to change with the way I do things.”

It was a rare moment of contrition from Morrison. But it could well be too late.

Reality cheque: we taught AI to spot the most used props this election. Here’s what it found

Who should I vote for? Guide to seven key policies in the 2022 Australian federal election where Labor and Coalition differ

‘Where are you going to not be a bulldozer?’: Tracy Grimshaw pins Morrison on whether he will change

‘Should have been a penalty’: Boy crash-tackled by PM gives his verdict

‘We are genuine’: China says it’s open to resetting relationship with Australia post-election

‘We are genuine’: China says it’s open to resetting relationship with Australia post-election

If Penny Wong becomes foreign minister will she repeat the numerous blunders Australia and the US have made in the Pacific?

If the polls are right, he may soon be the next Australian prime minister. So who is Anthony Albanese?

Who does the White House want to win the election?

Hating Barnaby Joyce: is it him, or is it us?

Reality cheque: we taught AI to spot the most used props this election. Here’s what it found

Australia’s jobless rate at 50-year low of 3.9% but fewer positions added in April than predicted

Who should I vote for? Guide to seven key policies in the 2022 Australian federal election where Labor and Coalition differ

‘Where are you going to not be a bulldozer?’: Tracy Grimshaw pins Morrison on whether he will change

Nine publishes a tribute to Morrison the little-known feminist. But who wrote it?