How climate denialism was mainstreamed in Australia

Climate change denialists have set up intellectual camp in that small space between doubt and certainty that doesn’t ever quite touch either. In that narrowing space, they assert an absolute dualism between certainty and falsehood and turn the great truth-seeking weapons of the 20th century — the scientific method and the norms of journalistic inquiry — against truth itself.

Here, News Corp acts as armourer to the camp. It has embraced right-wing positioning as a business strategy, and seamlessly integrated with the US right-wing noise machine. It is the vector that mainlines denialism into the Australian body politic.

What does this look like in practice? The gap between probability and certainty is turned to exploit “man-bites-dog” opportunities, with a “not all scientists” flavour. With this approach, the repetitive inevitability of the “dog-bites-man” reports of climate science can be safely ignored as “not news”.

This leaches into the general news ecosystem, encouraging mainstream media to play it safe. If “everybody knows” about climate change, then there’s no news to report. A 2018 report by US media critics Media Matters showed a 45% year-on-year drop in climate change reporting on the major US broadcast channels. 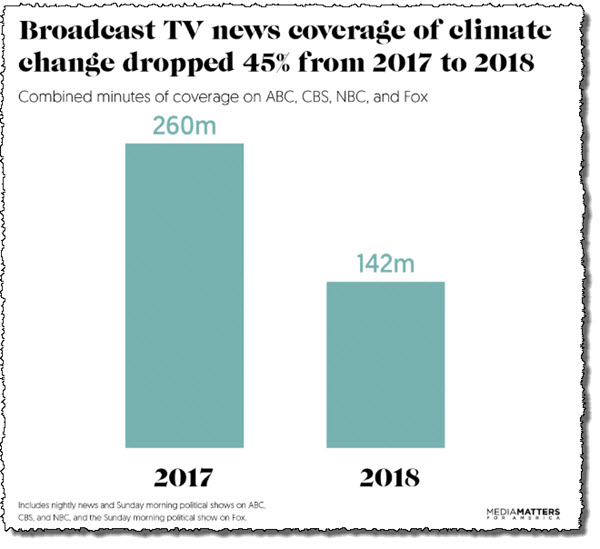 A local example? The morning after the Wentworth byelection, which had been largely determined by climate change politics, ABC’s Insiders spent an hour analysing the outcome without mentioning the words.

This is a strategy that’s being challenged by extreme weather events. These can’t be dismissed as “not news”. Instead the link between extreme events and climate change must be dismissed either as tasteless (“too soon”) or, in a back-to-basics play, not proven to the level of certainty.

News Corp is also the major distributor of explicit denialist opinion. Through a combination of the op-ed pages in The Australian, its tabloid columnists, and “Sky after dark” it gives a voice out of all proportion to its intellectual weighting. These voices are not designed to persuade. Like the original Collegio Urbano de Propaganda Fide, they provide talking points to the faithful which can then be transformed into the fake news of social media and pub talk.

Through this process, it embeds denialism in the right-wing catechism. As Malcolm Turnbull discovered to his cost — twice — a rejection of climate change is part of the price of entry to conservative politics. An element of public gaslighting is acceptable (Paris targets will be met “in a canter”). But accepting the science and committing to practical action? That’s another thing altogether.

For politicians needing majority support, this wedges them tightly. Think of Morrison brandishing his lump of coal in the House of Representatives, holding it forth like kryptonite against climate science. It’s great visuals for the conservative warriors sitting behind him, but terrible in the progressive urban communities where the next election seems set to be determined.

Using these norms of journalistic presentation, from op-eds to talk shows, to promote denialist belief encourages a both-sides-ism across the journalistic landscape. If the right reject climate change, then an acceptance of the science — and the imperative of action — must be a left-wing position. Win-win for denialists: it locks the conservative base in more tightly behind them.

There’s nothing inevitable about the alignment of the right (and News Corp) with denialism. Back in the early noughties, the link was still loose enough for James Murdoch to be permitted to roll out an internal carbon neutral plan for the company. In 2007, John Howard campaigned for an emission trading scheme.

News Corp employs enough good journalists to be able to point to stories they’ve based on the science.

But about a decade ago, fossil fuel funding of the resurgent Tea Party right in the US created an irresistible force. Denialism became a criterion for funding and it fuelled conservative dogma.

The journey of Australia’s right can be traced through the otherwise contradictory public comments of, say, Tony Abbott. And as the voice of — and to — that dogmatic community, News Corp got on board for the ride.

This piece is part of our dedicated climate change series, Slow Burn. Read the rest here.

Independents: Inside the insurrection of the centre

View from The Hill: Albanese’s emissions plan is an exercise in political smarts

PM Morrison: The skipper who won’t play with a straight bat

Christian Kerr: the living — and now departed — reason why anonymity has power in politics

A rotten end to a rotten year for a rotten government

Toxic culture report one day, shouts of ‘get a room’ the next. Is Parliament listening?